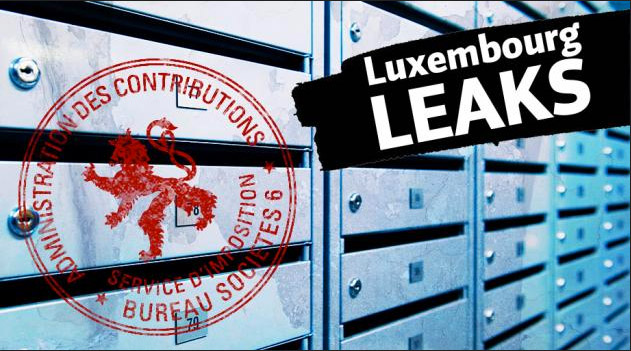 Perrin has been investigating tax issues for more than three years.
Below the exclusive videos, he explains how the story has grown in collaboration with ICIJ and its media partners, including The New York Times, The Guardian, Asahi Shimbun, Le Monde.

The leaked documents involve deals negotiated by PricewaterhouseCoopers (PwC), one of the world’s largest accounting firms, on behalf of hundreds of corporate clients.

#LuxLeaks Edouard Perrin looking for Tax Bureau Number 6 in Luxembourg – Exclusive behind the scenes of the Tax Offices in Luxembourg where the tax cuts were officially approved (copyright Premieres Lignes pltv.fr)

Amazon, IKEA, GSK, Pepsi, FedEx and 340 other international companies have secured secret deals from Luxembourg, allowing many of them to slash their global tax bills while maintaining little presence in the tiny European duchy, leaked documents show

These companies appear to have channeled hundreds of billions of dollars through Luxembourg and saved billions of dollars in taxes, according to a review of nearly 28,000 pages of confidential documents conducted by the International Consortium of Investigative Journalists and a team of more than 80 journalists from 26 countries.

The leaked documents involve deals negotiated by PricewaterhouseCoopers, one of the world’s largest accounting firms, on behalf of hundreds of corporate clients.

“This story is global. It can only be told with a global eye”
From Cash Investigation to #LuxLeaks
by Edouard Perrin
journalist, Premières Lignes

I started work on that particular topic in August 2011. At that time I was a staff reporter at France 2 –French Television, on leave to launch a new investigative programme focused on business issues produced by Premières Lignes Télévision. I was in charge of producing a 60-to-90 minute piece on tax evasion. The assignment initially covered individuals trying to escape the taxman but I decided to switch angles and started looking for what I could find on what is euphemised as corporate  “tax optimisation”.

Few people were aware of it at the time, and they were mostly NGOs advocating for a more balanced share of tax revenues for poor countries. But it nevertheless became clear straight away that it was a much bigger problem, and that there were answers very close to home, in Luxembourg – because companies found a very welcoming environment there, in large part due to mysterious tax rulings.

Various people with inside knowledge told me about those tax agreements. I knew they existed, but I also knew they were highly confidential. I knew companies used those tax rulings to shift profits around. From that point on, I knew what to look for.

Which is why, when I first saw the material itself, I immediately realized the importance of the data: the sheer number of agreements, the names of companies involved and the amounts of transactions disclosed.

My first concern regarding the documents was to make sense of them. Even though I was aware of the tools used in the proposed strategies, I had to understand their intricate workings. On my own, there was no way to exploit them properly and thoroughly.

I had to find somebody I could trust, an expert who could decipher them and who would work with me. The quest for that rare bird took me some time. I finally met Richard Brooks, a reporter for Private Eye and a former tax inspector. He had exposed the Vodafone tax scandal a few months before.

His reaction the first time I showed him the documents was the confirmation I needed from an expert. He was surprised by how blatant the tax plans were, explaining in black and white, with charts, what the companies were doing and why they were doing it.

Once I decided what companies I was going to investigate, my biggest concern was not their reaction, nor the reaction from the Grand Duchy of Luxembourg.

I was nervous about being able to find the correct narrative and write a story people could understand. Tax issues are not glamorous and usually make poor television. Keeping that in mind was essential.

The documentary aired on May 11, 2012. A few days later, Luxembourg’s Finance minister felt compelled to appear in a press conference in order to do some damage control. My investigation was deemed “tendentious” and Luxembourg was under attack only because it was a very wealthy but small country. Nothing on the secret agreements we had revealed. One company threatened to take legal action but in fact did nothing.

We produced a second film a year later, based on new documents I was able to obtain after the first film was broadcast. The second episode, shown during prime time, was a huge success with viewers in France.

ICIJ contacted me because they managed to access the same documents I had previously investigated; that was a real opportunity to have a systematic strategy regarding the documents. What I had done before on my own, in a fragmented way, could be vastly expanded thanks to dozens of reporters, in multimedia, with technologies I didn’t have.

This story is global. It can only be told with a global eye.

As for reactions, I hope institutions such as the European Commission will take a close look at what we revealed about those documents. Those are the same secret tax agreements Luxembourg only reluctantly and very partially released when summoned to do so by the European Commission, which is currently investigating the use of tax rulings as a possible illegal state aid.

At times when public money is so scarce, I think public interest in these issues is very high.