A film by Paul Moreira

“A Look at Ukraine’s Dark Side” (read here) An interesting review of Paul Moreira’s film « Ukraine The Masks Of The Revolution », published in Consortium News, the investigative news magazine directed by the award winning investigative journalist Robert Parry who broke many of the Iran-Contra stories in the 1980s for the Associated Press and Newsweek which led to to the Kerry Committee report. In 2015, Consortium News  won the I.F. Stone Medal from Harvard’s Nieman Foundation.
“Americans have been carefully shielded from the ugly underbelly of Ukraine’s Maidan uprising in 2014 that overthrew the elected president and installed a U.S.-backed, fiercely anti-Russian regime which has unleashed armed neo-Nazis. But a French documentary has dared to expose this grim reality.” Consortium News

Ukraine, masks of the revolution

Presentation of the film:

Without them, there would have been no Ukrainian revolution.

In February 2014, paramilitary groups fought against the police in the streets of Kyev and ousted President Yanukovych. They settled a new government.

According to western media, they were the revolution heroes. They fought on the right side.

But they are actually extreme-right militias. And they are now heavily armed.

The Right Sector, Azov or Svoboda created parallel irregular forces that easily go out of control. In Odessa, in May 2014, they were responsible for a mass killing without facing any charges. 45 people burnt to death. A massacre that didn’t get much attention.

How come western democracies haven’t raised their voice in protest?

Most likely because these Ukrainian nationalist militias actually played a significant role in a much larger scale war. The Ukrainian revolution was strongly supported by the US diplomacy.

In the new cold war that opposes Russia to the USA, Ukraine is a decisive pawn. A tactical pawn to contain Putin’s ambitions.

“Ukraine, masks of the revolution” by Paul Moreira sheds light on this blind corner.

In this documentary, we  used 10 seconds of archive shots from the documentary « All Things Ablaze » by Oleksandr Techynskyi, Aleksey Solodunov and Dmitry Stoykov (Honest Fish Documentary Stories, 2014, Ukraine). They were mistakenly sourced to another production.

We sincerely present our apologies to the authors and to the production company Honest Fish Documentary Stories (Yulia Serdyukova) and we have removed the shots for future broadcasts. 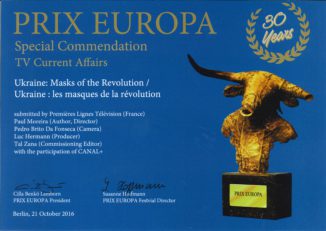