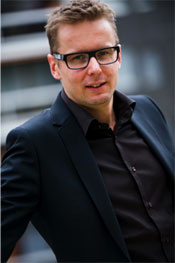 Luc Hermann is a producer, film director, author and journalist.

He is the president of Premières Lignes, a independent documentary production company based in Paris. He has produced over 200 investigative documentaries with prominent directors for major networks including Netflix, France Télévisions, Arte (France / Germany), Canal+, HBO, BBC 1 (Panorama programme) (UK), Discovery Networks (USA), RTBF (Belgium), RTS (Switzerland) and he has organized international partnerships with the International Consortium of Investigative Journalism (ICIJ) to  contribe to major breaking investigations including LuxLeaks, the Panama Papers and the Paradise Papers.

He is a also a film director(selected filmography below).

Luc Hermann started his career as a journalist and associate producer in the United States, where he worked at CNN International for 2 years. Then he worked for 18 years at French network Canal + as international reporter and film director.

From 1999 to 2006, he co-directed with Paul Moreira the investigative programme “90 minutes”.  A key programme that impulsed the emergence of a new investigative journalism in France. At this time, Luc Hermann investigated large companies on very sensitive subjects such as the controversial Total’s gas pipeline in Burma or Pfizer’s marketing of a an antidepressant drug for kids. He also directed several documentaries decoding spin doctors’ strategies during the wars in Kosovo and in Iraq.

Together with Paul Moreira, he is since 2004 at the head of a French freedom of information act (FOIA) campaign, aimed at lobbying French politicians. The “Liberté d’Informer” campaign has organised numerous debates at universities and at the French Natioanl Assembly, and received the support of hundreds of French journalists, elected officials, lawyers. To date, more than 6,000 signatures have been submitted to the campaign’s website, www.liberte-dinformer.org.

Luc Hermann pioneered the production of creative and innovative formats with the help of talented journalists, writers, IT specialists and graphic designers. Linking TV-aired documentaries to interactive web developments offers a much enriched viewer’s experience. Lately Luc Hermann directed a 2-episode documentary on soft power games and spin doctors’ strategies “Jeu d’influences”. The TV broadcast was associated with an online game where the viewer could put himself in a spin doctor’s shoes and experiment the perception management of crises. The series received multiple awards and distinctions. He also published an eponymous book.

Luc Hermann is often invited on French radio France Inter as a columnist sharing his analyses and decoding of political or corporate spin. He’s also an advisor at the London Center for Investigative Journalism and a regular speaker at Lille School of Journalism (ESJ), at the London City University investigative journalism summer school and at the African Journalism Investigative Conference in Johannesburg.